Peter Treiber shared industrial photos he took at Bethlehem Steel and other locations with an audience at the National Museum of Industrial History on November 12, 2022.

How to photograph steel in the making and get closer to hot, molten metal?

That was the question at theNational Museum of Industrial HistoryIntroducing the (NMIH)”Capturing Steel: Bethlehem Steel Photography with Peter Treiber.”

Peter Treiber, a photographer who worked for Bethlehem Steel, took photographs that were used in the company’s advertising campaigns in the 1970s and early 80s.

Treiber was born in Brooklyn, NY, into a family of painters and photographers.
He took pictures in another company, international nickle, before arriving in the Lehigh Valley. He landed in Easton after seeing a blind ad for a steel mill photographer in the New York Times that ended up being a call to work at Bethlehem Steel.

In addition to taking photos for use in advertisements, he documents industrial processes and works with legal departments, plant managers and research units.

As Treiber said, “pretty much any department in the company that needed a photo, they called us.”

Treiber’s work also extended to photographing other industries like the nickel industry. He has also worked for General Motors, New York Port Authority, Time and Fortune.

On Saturday, Treiber shared photos of his work that have been archived at NMIH.

Treiber said the NMIH collected much of his work after companies like Bethlehem Steel shut down their marketing departments and sold or shipped records. Other parts of his collection have lived in other museums as well as in private and corporate collections across the country. 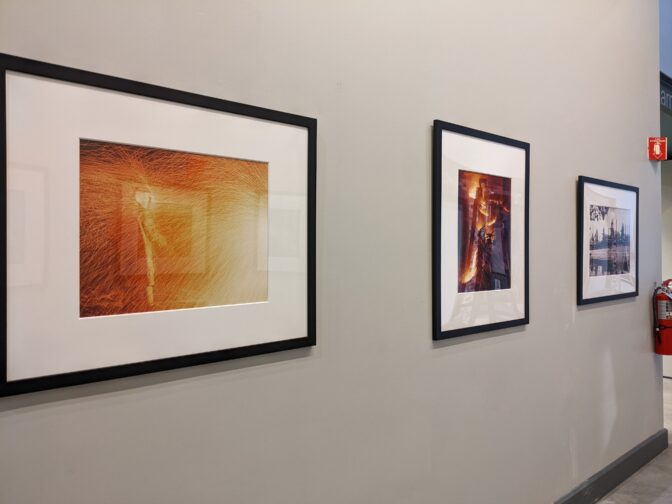 Peter Treiber’s work exhibited at NMIH will also be shared in the NMIH digital collection.

Treiber took thousands of photographs, documenting the emergence of fiery steel from the furnaces, workers in reflective coveralls engulfed in sparks and the forging of hot metal.

“I cracked a number of filters, especially in the early days of digital,” he said.

While working for Lehigh Heavy Forge, Treiber recalls, “We had to have an infrared filter on the front of the camera. It was part of the beginnings of digital photography and I cracked several because it was too hot. This infrared filter was designed to block infrared energy so that it absorbs it and boom! Crack.”

To take pictures, Treiber often stood about 20 feet from the molten metal. There were times when Treiber said he was shocked that workers weren’t wearing heat-reflecting coveralls during their day.

Treiber and other photographers sometimes tried to take pictures while everything was in motion, which made the crew members look like ghosts in their heat-reflecting suits, blurry and moving on the steel floor.

“That’s always been our problem,” Treiber said. “We were always trying to take pictures of moving things.”

Treiber also photographed coal mines as part of documenting the creation of steel.

Photographing in the mines came with a unique set of problems. He said mine officials were skeptical of camera operators using flashes because they emitted a spark that could detonate the mine.

“The years I’ve done it at other mines, I was taking underwater photography strobes that were guaranteed not to get any coal mine gas in there so they were safe to use,” said Treiber.

In 1982 Treiber’s work for Bethlehem Steel ended. He said most of the ad marketing department was fired and he went freelance.

Treiber’s work at the NMIH will be on display at the museum throughout November as part of ArtsQuest Invision Photo Festival. The festival presents photography and the photographic arts. More than 1,500 photos of Treiber are accessible.

The 7 Mistakes to Avoid That Can Destroy Your Photography Business

Let’s talk to the elephant in the room: There is probably 1,200 billion pieces of content about running a business. I’ve read maybe half of it myself, and there is some amazing information available, but let’s make it our goal to create the top mistakes to avoid when deciding to go from hobbyist to pro.At […]

Hooker Furnishings has signed a subscription agreement with ALL3D to create fully digital images for its latest home furnishing product group, the Trade & Market Double. This new line, aimed at the next generation of consumers, offers an assortment of fashion-forward, globally-inspired designs for small spaces. ALL3D, a San Francisco-based technology startup with a state-of-the-art […]

Glam Tech takes photography to the next level with Glambank, the ultimate lighting ecosystem | News