Rick Smith ’02 explores and shares the stories of the planet.

Whether he’s staked out on a well-worn bear track on a wilderness island off the coast of Alaska or standing in the corner of a room full of community leaders in Ghana, Rick Smith’s job is to watch and wait.

As a cinematographer for documentaries, Smith doesn’t move the action. But with patience and diligence, he’s there to capture the moment.

“YOUR ENTIRE GOAL IS TO CAPTURE A MOMENT WHEN THEY DO SOMETHING THEY DON’T USUALLY DO.”

“When you create compelling images, it’s a very satisfying process. Even outside of the finished film, you’re able to create something that either has aesthetic beauty or tries to capture moments of humanity,” Smith explains. “Documentary work, when it is done well, there is an intimacy.”

Smith graduated from Whitman College in 2002 with a degree in biology. He didn’t realize his upbringing prepared him for his award-winning career, but he felt he could try anything.

“At Whitman, you start getting excited about the world,” he says. “Whitman instilled in me a kind of intellectual curiosity and confidence that helped me feel that I could truly choose any career path, however unlikely it seemed at the time.”

As a child, Smith was fascinated by the type of stories he would end up helping to tell. He loved Mr. Wizard, Bill Nye the Science Guy, Jacques Cousteau’s adventure documentaries – any science and nature show.

“It makes the world bigger,” he says. “It shows the complexity of the world; it shows that people are passionate about things you may never have heard of.

At Whitman, he enjoyed learning science communication and the history of science. He studied abroad in Costa Rica during his freshman year, and the rigorous tropical ecology program convinced him he needed to make adventure a permanent part of his life.

“You navigate through incredible and varied landscapes, and it was kind of magical.”

Smith returned to Costa Rica after graduating to be a teaching assistant in the program and remained convinced that he would go on to become a biologist. He held a few research positions and began applying to graduate schools. In a bold leap, he chose the MFA program in Natural History Science and Film at Montana State University in Bozeman.

The transition to the humanities was delicate. Science had trained Smith to look at the world in an analytical, often unbiased way. Filmmaking and film studies required a different level of emotion and personal voice.

“THE DOCUMENTARY WORK, WELL DONE, THERE IS AN INTIMACY.”

Smith succeeded with time and desire. His innate understanding of technical systems helped him learn the equipment, and his determination landed him freelance jobs where he was able to practice his skills.

Breaking into the documentary industry was not a linear journey. “You can work on a big project and then it can take another year before you have another chance to prove yourself or get another paying gig,” he says. “It can be difficult. I know a lot of people who are in the same situation, and my advice to them is that the sooner you focus 100%, the sooner it will happen. … It’s really about being able to say ‘yes’ as often as possible.

Smith’s big breaks came from his relationships with his classmates and being in the right place at the right time. First, a colleague invited him to work on a National Geographic series. Then Zero Point Zero, the production company behind shows like “Anthony Bourdain: Parts Unknown,” began shooting a series called “MeatEater” based on Bozeman.

They needed cameramen who could run in the mountains with a ton of gear. Smith was ready. 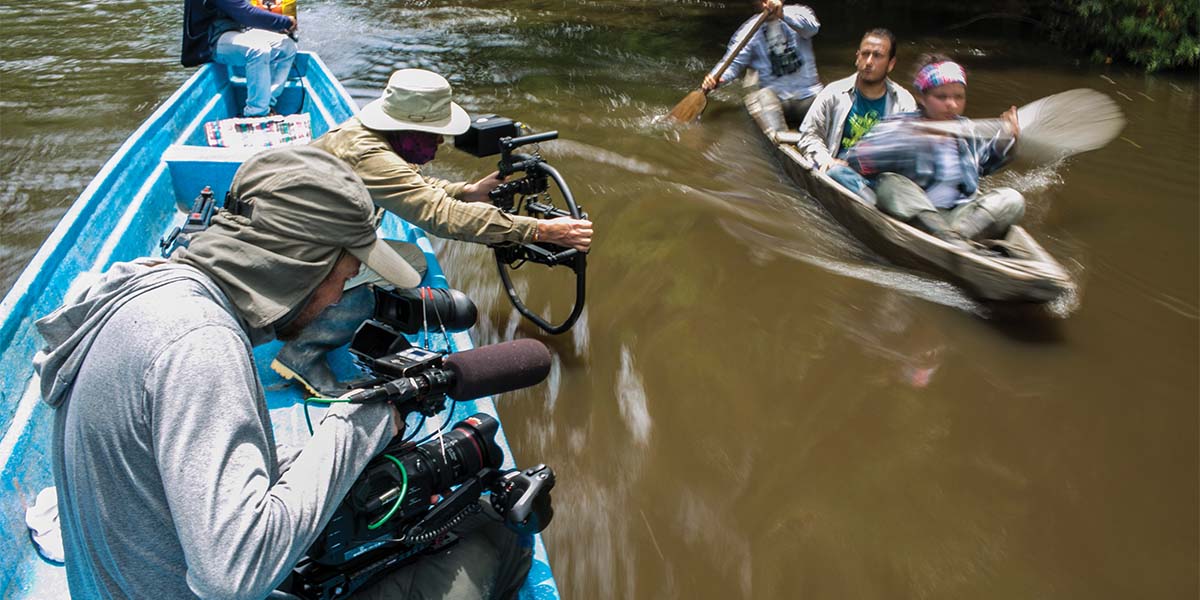 As cinematographer, Smith ensures that he and his team capture the images that meet the needs of a story, guided by the director of the film or show. It also serves as an interface between the filmmaker’s creative vision and the technical realities of filming.

About a third of Smith’s work consists of “bluechip” wildlife photos that show animals in the wild, with no signs of human interference. Filming these moments takes a small crew and a lot of time – maybe fifteen hours a day for weeks to film an event that unfolds in less than a minute.

“So you’re trying to film a grizzly bear anterior to an elk. You know, it happens at a certain time of year, pretty much in a certain area,” he says. “Your goal is to capture a moment when they do something they don’t usually do.”

The rest of Smith’s work is hosted programming, where a person is on camera telling the story, often in a dramatic or remote location.

“You can see how people all over the world exist. This is what makes the journey exciting.

While Smith feels privileged to have such incredible opportunities, he approaches his work with humility and a deep appreciation for the other people behind the cameras, in front of the cameras, and ultimately watching the final film.

“I am always inspired by the generosity and kindness of the subjects I work with – they let me into their lives and allow me to do my job of documenting them and the world they live in. You hope you create content that help people understand places they otherwise would never have thought of, where they would never go,” he says. “You’re trying to give depth to the world.

Wedding photography is making a comeback

July 13, 2022 With strict Australian Covid-19 restrictions unlikely to return, weddings across the country are backbreathing new life into the hard-hit photographic sector. No more wedding parties wearing silk masks! According to data from the Australian Bureau of Statistics (ABS), Covid created the biggest drop on record in the annual number of marriages, down […]

The Egyptian Amina Kadous is one of the eight photographers nominated for the 6th edition of the Madame Figaro Arles Photo Prize during the “Les Rencontres de la Photographie à Arles” Festival. The festival takes place every year in the city of Arles, in the south of France. This year, the festival will feature 40 […]