As a kid in the 1980s, I grew up on a weekly diet of TIME magazine and evening news. The famine in Ethiopia over the past decade has generated an endless stream of news filled with black body images, so much so that my whole conception of the continent has been built on the tragedy of one nation. For me, Africa was a wasteland of hungry people – a thought conceived through photos.

Of course, Africa is hardly that. The second largest continent with the second largest population has beaches, deserts, mountains, fertile farmland, pyramids, and a wine region. And yet images of abject poverty – especially those of children – continue to perpetuate visual stereotypes of a place that has inherited the racist nickname of “”the dark continentIn the 19th century by Europeans seeking to justify imperialism and the slave trade.

This month, Antonio Aragon Gives Up won £ 10,000 and the Environmental photographer of the year Award 2021 for his image of a toddler lying in the ruins of a dilapidated building in Ghana. His image with other winners was posted on the BBC and The Guardian, causing a commotion on Twitter.

British director and photo critic Benjamin Chesterton initiated a long discussion thread, starting with three important questions on the winning photo: 1) Why is the child sleeping in the sun? 2) Why is the child sleeping in an abandoned house? 3) Is it because the child is black that the judges do not ask these questions? He went further by interrogating the work of Renuncio, whose portfolio is filled with images of African children in scenes that raise questions of child safety, staging and racing.

This photo, which won the 2021 Environmental Photographer of the Year award, raises so many questions. 1: Why does the child sleep in the sun? 2: Why is the child sleeping in an abandoned house? 3: Is it because the child is Black that the judges do not ask these questions? https://t.co/qpxBo4f7Ya 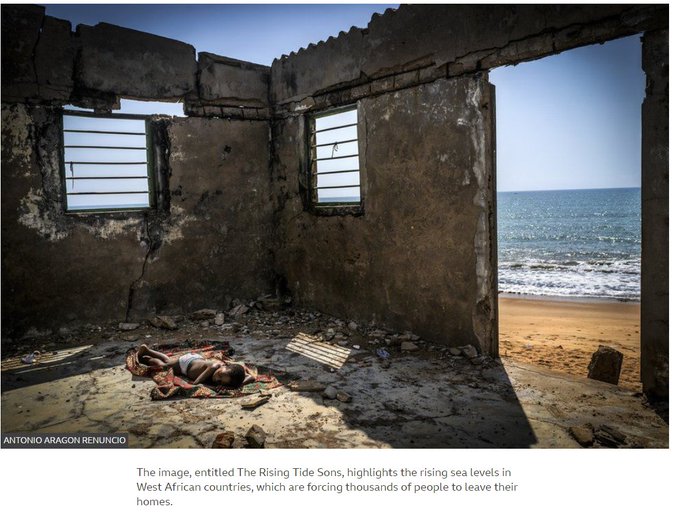 Among the various threads I came across tweets from two black photographers, UK-based Shaun Connell who runs LeBlkGaze and based in Ghana Nana Kofi Acquah. Both spoke candidly about negative portrayals of Africans and how contests and media continue to reward photos that perpetuate colonialist stereotypes.

I contacted them by email to find out more.

This interview has been slightly edited.

PhotoShelter: How did you hear about the photo and what was your first reaction?

Shaun Connell: I first saw the photo after it was posted by The Guardian November 8. My first reaction was one of the already seen. Here we go again, another grand prize won by a photo that uses an African child as a prop to tell a story that no African would tell in this way. I understand the photo was taken for impact.

Nana Kofi Acquah: When I first saw the photo, my immediate reaction was, “What kind of irresponsible parent will let their child sleep in the sun?” In sub-Saharan Africa, the sun gets uncomfortably hot, and if you spend too much time in it you quickly get dehydrated, headache, or hot. I have never seen a parent put their child in the scorching sun. Am I saying it’s impossible? No. I say because it’s so rare, I would love to know the history, and more importantly, how it has something to do with climate change. The rare times I see children attracted to the sun is when they have malaria, and even then it will only make you sicker so no parent puts their child in the sun. Because of what I know the sun can do to a child lying there at this time of day, my first instinct would be to move the child. To think that someone thought it was a good time to take a photo for a contest is just plain disturbing.

You refers to to “visual violence” in a tweet. Many people are aware of physical and emotional abuse. Could you expand on the definition of visual violence with respect to photography and documentary / photojournalism?

SC: Visual violence is the impact caused by the constant, relentless, and dehumanizing way of visually representing people with black and brown skin. If it is not poverty, it is distress. If it’s not distress, it’s pain. If it is not pain, it is poverty. It’s a circle of confusion that reinforces the tropes and stereotypes that have existed in photography since its inception.

Visual violence is the impact caused by the steadfast, relentless, and dehumanizing way black and brown people are portrayed visually. If it is not poverty, it is distress. If it’s not distress, it’s pain. If it is not pain, it is poverty.

In many cases, there is a story to be told. The key is the way it is said. The novelist’s excellent TED Talk Chimamanda Adichie cautions us against telling a single story about another person or country. She rightly states that we risk a critical misunderstanding. It really hits home looking at photos like this.

The competition jury appears to be both racial and sexual, but I was also surprised to see only one professional professional photographer with significant experience in photojournalism (i.e. Josh Haner of the New York Times). Is it a lack of visual culture on the part of the jury?

SC: Juries can seem diverse, that doesn’t mean diversity has the voice it should have. Too often, diversity is not invited into the room on an equal basis. Yet when decisions like this are made, I see little to no evidence to suggest this is true.

There is certainly a disconnect in the lack of visual literacy that could be addressed by adding more photojournalism experience. There seems to be a default stance of gratifying photos that embrace the visual language of 20th century Europe and America. For many, this is the de facto standard by which all photos should be judged. It’s the 21st century and it’s time for the industry to make room and accept alternative visual perspectives.

Many critics (photographers included) have decried the attribution of what they call “poverty pornography” in photo contests for decades. Africa and African children have been the subject of such images for years. What does it take to improve the situation?

SC: Let’s start by not rewarding photos like this. Let’s find different ways to represent Africans and tell their stories.

“The country is sweet” by Rhoda Tchokokam. This photographic series takes shape during the artist’s last stay in Cameroon and explores the contradictions that play out in the popular expression “the country is sweet!” https://t.co/9xjpJ47Fmh

I would like to see the industry embrace the way Blacks and Browns represent themselves and their stories visually. There is a real need to see Africa and its diaspora as a vision of themselves. I’m working to solve this problem with TheBlkGaze, an online platform dedicated to celebrating black perspectives in photography. Over the past year, we’ve posted some compelling Q&A that illustrate a very different look and storytelling that should be understood and appreciated just like other looks are. There is room for all of us.

For me, these changes would make the sector fairer, more responsible and more democratized.

NKA: If you google “African Child” and compare it to “British Child” or “American Child”, you will immediately have a clear idea of ​​the predominant images. The world needs to know that our children don’t always starve, that they are not always eaten by vultures. They are not always malnourished, dirty or sick.

What is your position on “international” photo competitions? Do they offer excellent marketing opportunities (especially for African photographers who might otherwise not be exposed) or are they consistently flawed?

NKA: I have been a jury for the World Press Photo Contest, the Bartur Photo Award and a few others in recent years. The competitions open. They are becoming more and more inclusive, so it is now common to find both juries and contestants from all over the world, but that hasn’t changed much because the way we look at it hasn’t changed. The average American or European grew up thinking that photojournalism and documentary photography should be pessimistic or at least risky. If you don’t want to shoot like that, your work won’t make it to contests. If our appetite for dark images does not change, I will be concerned when more Africans start winning in these competitions, as it will mean that they will have resumed the work of exploiting Africans and African communities to win prizes. .

[Contests] are more and more inclusive, so it’s now common to find both juries and contestants from all over the world, but that hasn’t changed much as the way we look at it hasn’t changed.

When I think of non-African photographers working in Africa, I think of photographers like Alice Seely Harris who exposed Belgian violence in Congo to James Nachtwey covering atrocities in South Sudan or Rwanda. What, if anything, makes their work different from Renuncio’s image?

NKA: I won’t be surprised if Renuncio really considers himself a follower of Nachtwey or Harris. The type of photojournalism they practice may have drawn attention to war or disaster, but not much else. In fact, most of the time their viewers only remember dismembered bodies or thoughtful faces, but life is much more nuanced than that. People are people first, before they have problems. We cannot sacrifice human dignity in the name of calling attention to atrocities. The people in Harris, Nachtwey, and Renuncio’s photographs have names, lovers, dreams, stories, hopes, aspirations, fears. These are whole human beings going through difficult times, not just caricatures of pathos. Good photojournalism should focus on full characters, not flat characters.

Note: Environmental Photographer of the Year Awards says PetaPixel, “We are having discussions internally and with industry experts regarding the guidelines specified and the issues raised, and we will give these discussions the time they need and deserve. Then we will take action to ensure that our policy on ethics in photography is clear, effective, and that we have the processes and safeguards in place to support it.

Allen Murabayashi is a graduate of Yale University, president and co-founder of Photo shelter blog, and co-host of the “Vision Slightly Blurred” podcast on itunes. To learn more about his work, see his website and follow him on Twitter. This article was also published here and shared with permission.

The most colorful destinations in the world

A vibrant and colorful scene can be one of the funniest things to photograph. There is so much going on that it’s hard not to find a good shot. And, if you’re looking for a colorful place to go, a recent and totally unscientific study has some recommendations. About the study This “study” was carried […]

Mark Khan, a local Twin Cities artist, brings black representation into angelic spaces with his first solo photography exhibition “Forget Me Not” premiering at Coffman Memorial Union on February 3. For Mark Khan, no artistic hurdle is too high to leap. The local fashion designer, production company creative director and photographer has his first solo […]