…It was a glorious day to be on the lake today and wildlife was everywhere. The photo above is of an egret that was perched on a branch in the water…the water reflections make an amazing display on the underside of its wings and water streaks from its foot as he rises in flight. Below, a Turkey Vulture patiently waits for a meal to appear…perhaps a fish abandoned by another predator? Discovery of an island used as a rookery for great blue herons; they and their nests were everywhere. 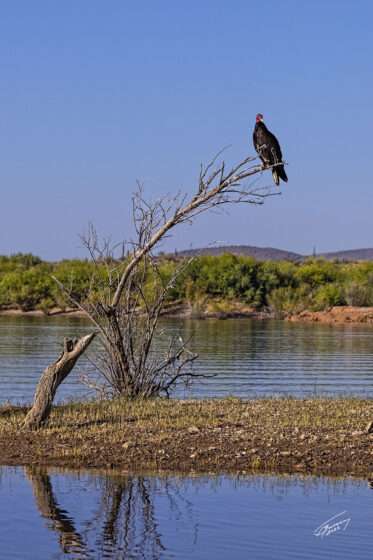 The lake has dropped about two feet since the last time I was there and over the summer about twenty more feet of water will be released…mostly for agriculture but some for municipal purposes.

It was a long day and I only had three hours of rest before getting up and heading to the lake.

Away from answering emails and hope to catch up by the weekend.

Have a nice day

And though age and infirmity overtake me,

and I can’t come in sight of my castle

dreams, teach me again to be grateful for life, and

for old memories that are good and sweet;

and may the evening twilight still find me sweet.

excerpt from A Prayer by Max Ehrmann

The easiest way to reach Mr. Grussing is by email: [email protected]

In addition to sales of photographs already taken, Ted does special shots for customers upon request and also does air to air photography for those who want photos of their planes in flight. All special photography sessions are billed on an hourly basis.

Ted also runs one-on-one workshops for those who want to learn the techniques he uses. By special arrangement, Ted will run one-on-one aerial photography workshops which will include real photo shoots in the air.

Opening of a new photography studio and gallery in Sonoma

A new gallery and photography studio has opened in downtown Sonoma. The space functions as a gallery for Jason Tinacci’s wine country photographs as well as a studio where he works with clients to create photos for advertising and marketing campaigns. “Visitors will get a glimpse of my natural habitat as a professional commercial photographer […]

Relational terrain – Personal projects of veterans features the work of nine veterans who participated in the most recent series of veterans’ workshops at the Colorado Photographic Arts Center. The exhibition marks the fifth year of the program, during which some participants attend free classes for five months under the mentorship of Frank Verney, Patti […]